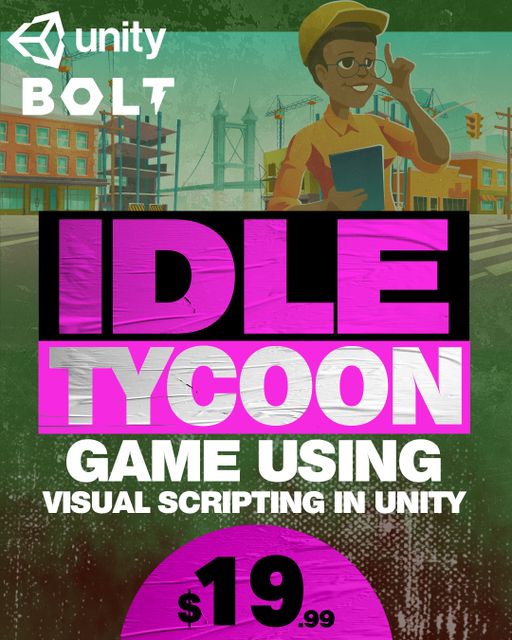 Use the Powerful Visual Scripting Tool in Unity (formally Bolt) to Build a Fun Idle Tycoon Game. No Coding Required!

Want to launch your own course? Contact me at gregmoss@firstclassgamestudios.com to learn about my Game Course Accelerator Program.

Welcome to Visual Scripting in Unity!

I'm happy to release this course and look forward to your feedback. Even if you do not choose to purchase my course I strongly encourage you to give Visual Scripting (formally Bolt) a try. It's a great tool for beginning or experienced developers.

Why Use Vispual Scripting for Making Fun Video Games?

Developing Games can be very fun and rewarding once you know how. And with Unity's Visual Scripting Tool (Known as Bolt when this course was created) it has never been easier to build full robust games without any programming.

I've been a business application & game developer for over 30 years.  I honestly think Unity's Visual Scripting tools is one of the best that I have worked with. In this course you too will quickly see the real power of Visual Scripting as we almost effortlessly build a fun idle tycoon game like adVenture Capitalist. Even if you have never programmed before, this course will allow you to get started building the game in a matter of minutes.

Over the past 30 years I've developed games in a variety of platforms and languages.  On Udemy alone I have successful game courses on Odoo, Python, C#, and PlayMaker. I really cannot say enough good things about Unity's Visual Scripting Engine.

It is easy to use and integrates nearly seamlessly with the Unity Editor.

How does Unity's Visual Scripting compare to Playmaker?

In addition to Unity's built in scripting there are several other popular visual scripting assets also available. One of the most popular is Playmaker. Playmaker allows you to use finite state machines to build games. Unity's Visual Scripting platform also provides state machine diagrams that perform much like Playmaker in managing states. The big benefit of Unity's Visual Scripting however is that the scripting flow diagrams themselves map directly to the C# and UnityEngine libraries. This gives you a great advantage if you already know C# when coming into Visual Scripting in Unity. Once I understood how to connect units and create flow graphs I was able to build games with virtually no learning curve at all as I already know C#.

Playmaker however uses custom actions that you use to power your state diagrams. These work well and Playmaker is a great asset. Unfortunately having to learn proprietary actions and commands is a big drawback of playMaker. Especially for those who intend to further their game development skills by learning C#.

If you are a new C# programmer who is finding the syntax of the code gets in your way I can't recommend Bolt enough. Even better, you can configure it to use real C# syntax in the visual units. I really enjoy how I can use real C# methods with the exact same arguments I would use in real C# scripts. It's like intellisense on steroids. This tight tie in with C# makes it that much easier to incorporate what you learn from Bolt into improving your C# skills.

Bolt allows you to focus on game design and achieving results rather than all the syntax of writing code. If you are an experienced C# developer you owe it to yourself to take a look at Bolt for prototyping and approaching game design from an alternative perspective.

Bolt offers a rich API so it is easy to integrate your own C# scripts with Unity's Visual Scripting flow graphs.

This is a preview of the recently viewed products by the user.
Once the user has seen at least one product this snippet will be visible.